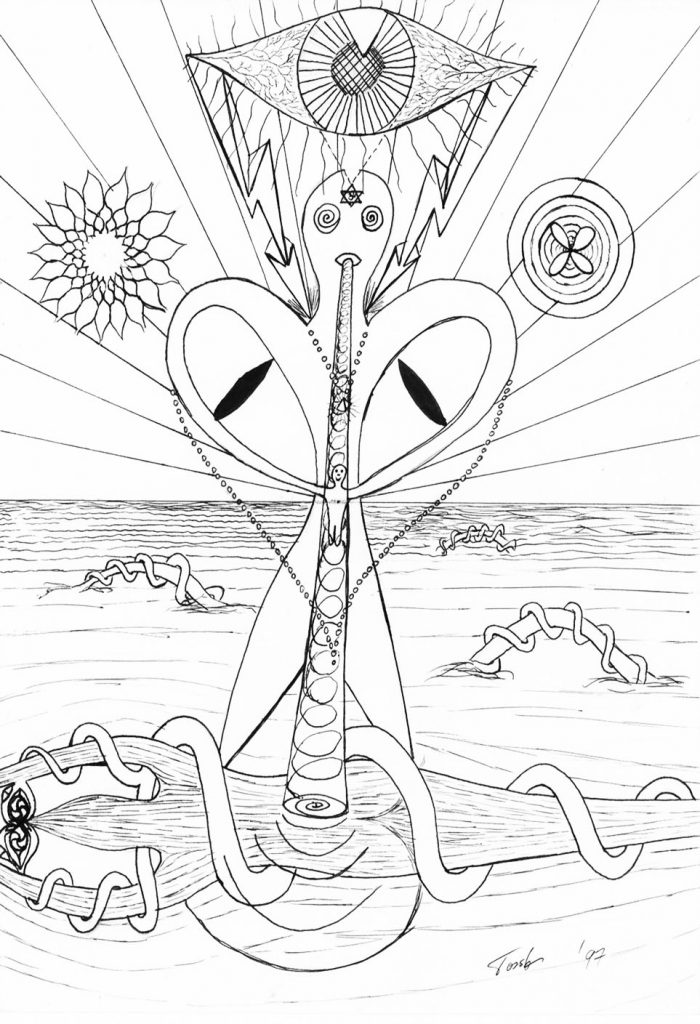 The above image is an expression of how it feels to give a vibrational sound massage
with a didgeridoo. It was drawn by Torsten (Omananda) in 1997.

Read the Testimonies
Leave your Testimony
Book a Session NOW

(It is my theory) the sound vibrations of the didgeridoo affect individuals on quantum levels. Playing closely over a person’s body with specific frequencies activates electromagnetic bio-circuits. Truth and wisdom results when the uncorrupted life source enters our bodies – from the heart-space – and obstacles (blockages) are thus removed. I am truly grateful to share this gift and skill I have acquired over a period of nearly three decades. I invite you to listen to this group sound therapy session (link), or watch the following video that demonstrates how an individual sound therapy session with a didgeridoo looks and sounds (not feels) like. To fully experience the binaural microphone recordings use headphones, please.

Natural and holistic methods have shown me that non-invasive, although highly effective, techniques do exist that deliver powerful and instantaneous transformations to create a healthy, non-toxic approach to restoring balance in the body-mind complex. Vibrational Sound Therapy with a didgeridoo and other frequency-generating sound tools I use can help to restore harmony on physical, mental, metaphysical, spiritual, and emotional levels.

I gave my first Vibrational Didgeridoo Session in the mid-nineties and I have witnessed miraculous results in numerous uplifting and deeply transformational personal and group sound therapy sessions that I offer in combination with visionary coaching and guided meditations. The sound waves of the didgeridoo deeply penetrate the human body. They can be felt strongly going through the flesh and bones. When these energetically cleansing sound patterns and vibrations brush through bodily tissues, healing naturally occurs through alignment. The grounding and relaxing sound fields that the instruments generate connect to the frequency of the earth’s resonant field. Through intuitive perception, while using detailed prayers, the sound therapist tunes into the area in need of cleansing and thus facilitates an energetic shift. Shamanic Sound Therapy is the container for resonance to create harmony. 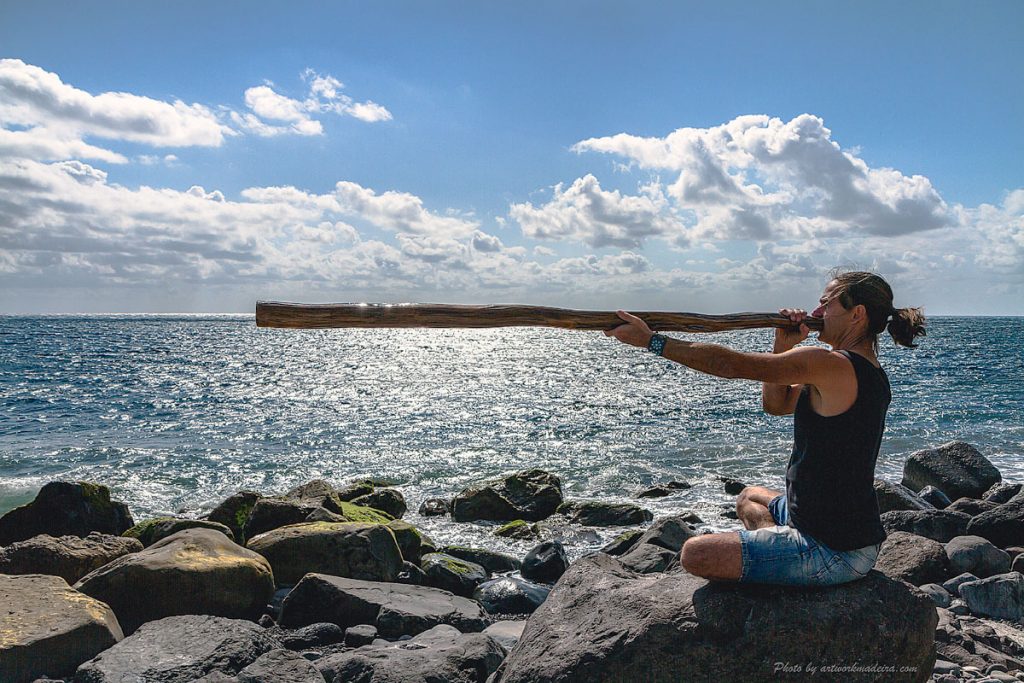 Self-healing is natural to all of us. We are nature, and we naturally regenerate. Playing didgeridoo with specific overtones closely over a person’s body typically causes their muscles to relax, but sometimes they can also convulse. Tense tissues typically relax when correlated issues that exist within the body-mind-complex are released. Relaxation is what instantly transforms dis-ease into ease. Sometimes more sessions are necessary to create the desired effect or enforce it, but it is not unusual that patients, after one session, are completely symptom-free thereafter. I often do long follow-ups. Check out the video below of a group therapy session. To fully experience the binaural microphone recordings use headphones. Also have a look at the pictures of a Sound Performance of Omananda at the Boom Festival in Portugal. I also make the instruments I use for healing / therapeutic sessions. Watch this movie that shows how I do that.

Furthermore, many healers’ paths begin with self-healing and so did mine. Mystical and magical experiences that I speak about in this book literally woke me up from a long and ignorant, deep sleep. I used to work professionally in hospitals where I understood that most doctors do not treat their patients as an integral aspect of the whole. Allopathic medicine often isolates parts of the body and most doctors only work on physical levels while ignoring important interconnected (cosmic) systems entirely. Sometimes entire organs are cut out and pharmaceutical (chemical) drugs are used to kill so-called foreign invaders. I know there are areas where Western Medicine has made huge advances, where people’s lives are saved, but too often patients do get hurt from an approach of medicine that ignores nature’s ability to heal itself. 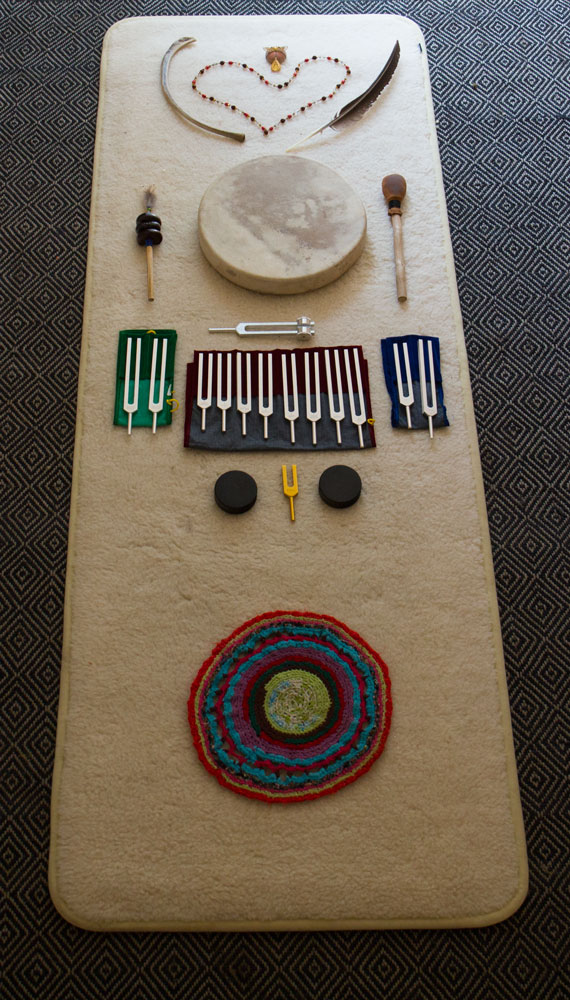 Book a private or group therapeutic session with Omananda

How much does a private session cost?

In the Bible it states, “In the beginning was the Word, and the Word was with God, and the Word was God.” In the Vedas (ancient Hindu texts) we read that, “In the beginning was Brahman with whom was the Word, and the Word is Brahman.” (Brahman is the creator). If the word is heard first as subtle and then cross sound then that sound also creates matter and I know that it transforms it, perhaps holds it even together, since sound patterns that can translate into light waves is what creation is made of. Mystics from various traditions keep on telling us that.

There are certain fractal calculations and sacred mathematical ratios and formulas that can be used to translate sound into shapes and color – geometry. We, as in me and the animators I worked with over the years, have done this in computer animations and projected this “sacred” geometry, from the platonic solids to the seeds and flowers of life to the smallest building blocks of life – the torus shape. All of them have specific frequencies that can be heard, if one had ears to perceive this subtle vibration. The Earth has the Shuman frequency that can be measured and all our voices are unique. This is the (theoretical) evidence that sound not only creates the worlds that we know as reality in our imagination, but that sound can also affect matter and transform it. When we have a thought that manifests, we speak it, write it, express it and then do it. This is how we create and affect the world around us.

In the field of cymatics, scientists have found that sound waves passed through various kinds of matter, such as paste, sand and water, causing the formation of geometric patterns on the surface that was set into motion by the sound. When the frequency was changed the patterns changed instantly and accordingly dividing into smaller and more refined shapes. Many people are becoming aware of themselves using the energy of sound, their spoken words, and affirmations to create positive changes in their lives. Transformation and Spiritual Awakening are results of this alignment of sound, our thoughts, the word, and the unique frequency that we carry.

Learn how to play didgeridoo

Close Menu
To comply with Internet Privacy Laws we ask for your permission to use cookies.YepNopePrivacy policy