It was very strong – the sound waves on the surface (of the body) – and you could feel it also how it goes into the body so you could feel the waves of the sound. This was really cool. At times, I had really pain. It made the pain really stronger. Sometimes it was like a vacuum cleaner that sucked out (the energy) and I could feel there was space afterwards. I could feel it was glued together and then it came in and ….. (making sounds with the mouths … she expresses the sucking and pushing of the didgeridoo) – mixing mixing mixing and tja … it was … and the pain I was breathing, like you said, i did not move when the pain got stronger and I realized that (the cause of it) is not in my neck, but in my heart – that’s blocked. Everybody thinks I’m such an open person, but the truth is there is a cage around my heart. And when you came with the sound, it was not 100% opened and free, but it took a layer. It was good! It was completely what I needed in this moment.

I was even in the hospital for the pain I am having in my neck, but the doctors could not help me. In your session, I could feel that it is not in my neck, but that it is here (pointing to her heart). That’s why when it was finished, I moved my arms, to open my body. I never had the treatment with the didgeridoo, but I listened to it in a concert, which is very different, because when you have it this close on the body, you can really feel the vibration! Now I just have to be with myself after your treatment, because it went so deep. 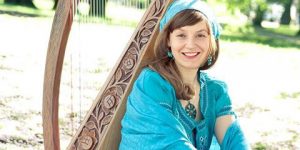